Below is a press release from the Massachusetts Department of Fire Services:

STOW, MA — State Fire Marshal Peter J. Ostroskey and Massachusetts Firefighting Academy (MFA) leadership observed the 50th anniversary of the MFA on Friday, October 8, 2021 as they presented certificates of completion to 60 local firefighters who graduated at the Academy’s campuses in Stow, Springfield, and Bridgewater.

Established by an act of the Legislature on Oct. 7, 1971, the MFA grew out of what had been known as the Central Massachusetts Fire Training Academy. It currently provides recruit and in-service training at three separate campuses and has graduated more than 13,000 recruit, call, and volunteer firefighters in more than 420 classes.

“We take them for granted today, but uniform standards for fire service training were still a new idea 50 years ago,” State Fire Marshal Ostroskey said. “From humble beginnings at a single location, we now have three operational campuses across the state, teaching strategies and tactics that have continued to evolve and improve during five decades of professional instruction.”

The 23 recruits of MFA Class #295 graduated at the Stow campus and represent the fire departments of Burlington, Everett, Gloucester, Haverhill, Lawrence, Milford, Norwell, Stoughton, Wakefield, Watertown, Wilmington, and Wrentham. The Stow campus was the MFA’s first location and serves as the Department of Fire Services’ primary headquarters.

Among the graduates of MFA Class #295 was Wilmington firefighter Daniel Feyler.

Students receive classroom training in all basic firefighter skills. They practice first under non-fire conditions and then during controlled fire conditions. To graduate, students must demonstrate proficiency in life safety, search and rescue, ladder operations, water supply, pump operation, and fire attack. Fire attack operations range from mailbox fires to multiple-floor or multiple-room structural fires. Upon successful completion of the Recruit Program all students have met the national standards of National Fire Protection Association 1001 and are certified to the level of Firefighter I and II, and Hazardous Materials First Responder Operational Level by the Massachusetts Fire Training Council, which is accredited by the National Board on Fire Service Professional Qualifications.

Today’s firefighters do far more than fight fires. They train to respond to all types of hazards and emergencies. They are the first ones called to respond to chemical and environmental emergencies, ranging from the suspected presence of carbon monoxide, to Fentanyl overdoses or a gas leak. They may be called to rescue a child who has fallen through the ice or who has locked himself in a bathroom. They rescue people from stalled elevators and those who are trapped in vehicle crashes. They test and maintain their equipment including self-contained breathing apparatus (SCBA), hydrants, hoses, power tools, and apparatus. 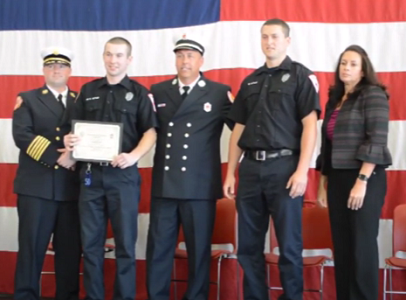