WILMINGTON, MA — At Tuesday night’s meeting, the Wilmington Board of Selectmen unanimously agreed to support a warrant article for the 2020 Town Meeting to name the library’s new outdoor seating area as “The Peggy Kane Reading Garden.”

The request to name the space after longtime School Committee member Margaret “Peggy” Kane, who passed away in May, was brought forth by Library Director Tina Stewart after the Library Board of Trustees endorsed the idea.

“Peggy Kane was a member of the Friends of the Library since 1998, and served as its President from 2009 to 2018… In addition, she served on the Board of Library Trustees from 2001 to 2004. She also volunteered at the Book Store Next Door and at many library events. Ms. Kane was also on the Wilmington School Committee for 18 years, and served as Chairwoman from 2007 to 2016,” Stewart wrote in her request to the Board of Selectmen. “In recognition of her volunteerism and her passionate belief in the importance of education and reading, the Board of Library Trustees voted to recommend to the Board of Selectmen that the library’s new outdoor seating area be named ‘The Peggy Kane Reading Garden’ in her memory.”

This reading garden, located behind the library, includes two picnic tables and two benches on a concrete patio surrounded by flowers and shrubs with a nice view of the adjacent wetlands.

“We would install a sign with Peggy’s name in the garden after Town Meeting,” Stewart told the Wilmington Apple. “We’re also going to work with Conservation Agent Ryan Hale to install educational signage to identify vegetation in the nearby wetlands.”

Stewart reported there’s been no vandalism since the outdoor seating area opened over the summer.

“During the Fourth of July celebration, some people moved the benches and didn’t move them back. That’s the worst that’s happened. There’s been very little litter,” noted Stewart. “It really is a lovely area with a beautiful view. People have been keeping it neat.”

The creation of the area, including furnishings, cost approximately $25,000, according to Stewart. The Friends of the Wilmington Memorial Library contributed $14,000 from its recent Annual Appeals. The rest of the funding came from a $5,000 donation in the library’s gift account, plus some state aid money.

“It’s great to see visitors using this space to read, have a snack, or just relax during a quiet time,” added Stewart. 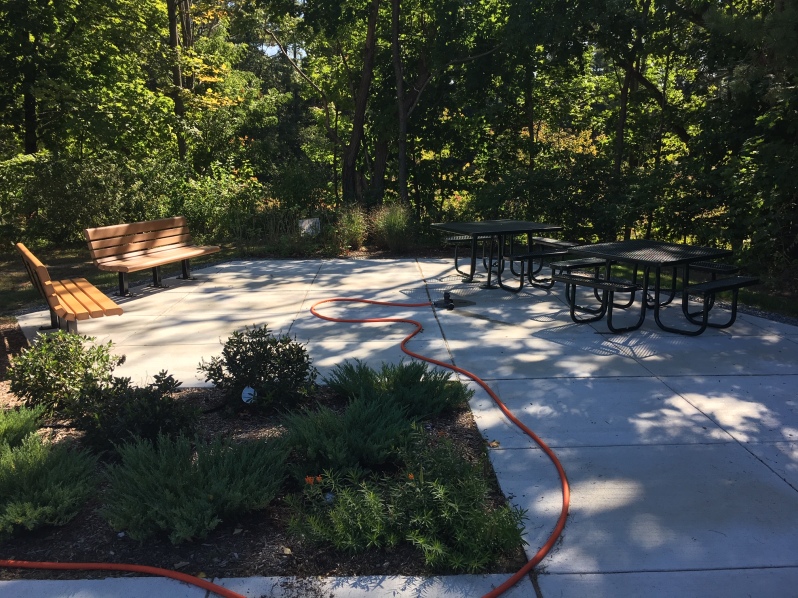