Below is a press release from DaMore Law, owned by Wilmington resident Peter DaMore and with an office in Wilmington:

BURLINGTON, MA — Dozens of community members joined the staff of Burlington’s DaMore Law earlier this month for a fundraiser at the Archer Hotel to support the Skate for the 22 Foundation.

Twenty-two veterans die from suicide each day in the United States. Founded by Robert “Bobby” Colliton in 2015, Skate for the 22 is an organization that creates and runs all-veteran hockey teams with the goal of preventing veteran suicide. To this end, the foundation not only offers those who have served our country with a sense of camaraderie and a place to escape the trauma they often carry around with them, it also provides suicide awareness and prevention education for veterans and their friends and families.

The Cinco de Mayo fundraising event, organized by DaMore Law in collaboration with Sonia Rollins, was well attended, with around fifty community members  coming together to raise $2000 for this cause – twice as much as their 2020 fundraiser.

“The Foundation is working hard to bring veterans back into a team environment and show them that we see them and they matter,” said Rollins. “It is an honor to be able to do what we can to support such a mission.  We hope that our Cinco de Mayo event will not only raise funds for the group but also spread awareness.”

The team hopes to hold this fundraiser annually, making it bigger and better each year 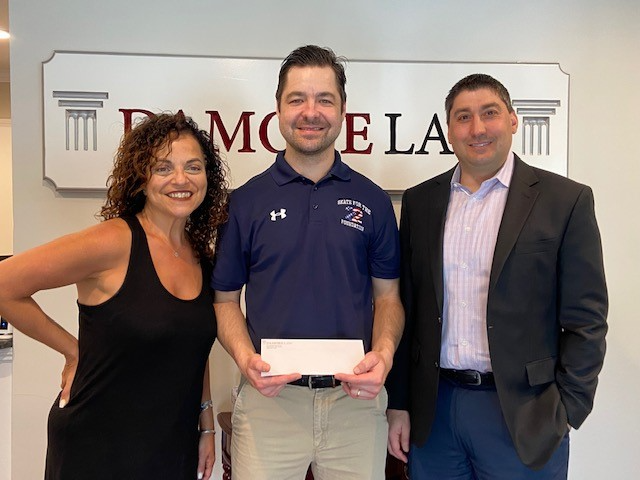 Sonia Rollins and Peter DaMore present a $2,000 check to Mark Tilch, Director, Skate for the 22 Foundation