Below is a press release from Worcester State University:

The biennial show features an extensive variety of art by more than 70 Worcester State students. Hassell’s painting was one of three works recognized at the Gallery’s opening reception for the exhibit on March 3, 2022. Awards donated by C.C. Lowell Art Supply of Worcester were also given for the Best in Show and Juror’s Choice from Kristen Sciascia, owner of C.C. Lowell and Worcester State alum; Stacey Parker, Worcester State Professor of Art and Gallery Director; and Brad Chapman, Gallery Assistant. 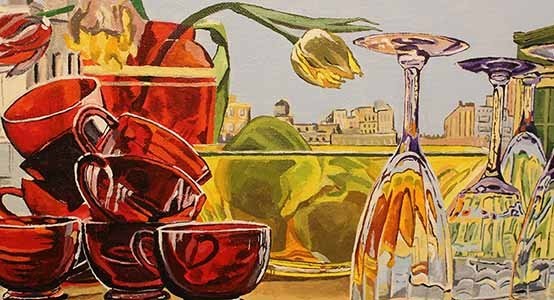 “After Red Cups and Tulips by Janet Fish”

About the Visual and Performing Arts Department

The Worcester State Visual and Performing Arts Department offers interdisciplinary and specialized artistic education that prepares students for professional lives in the arts. Its educational spaces encompass the Fuller Theater, practice rooms for music, and art studios at the University’s Sagamore Studios. VPA students gain in-depth knowledge of their preferred art form — art, music, or theatre — plus an understanding of what the arts have in common, and how they are performed and exhibited in the real world.