WILMINGTON, MA — Anthony J. Trimarchi, “Nino”, age 74, of Wilmington, passed away peacefully at home surrounded by his family on November 30, 2021.

Nino was born on July 27, 1947, in Chelsea, MA; he was the cherished only son of the late Letterio “Lillo” and Margaret (Oliveri) Trimarchi. Nino was raised in a large and loving Italian family; he started his life in Chelsea before moving to Wilmington as a young boy. Nino was raised in Wilmington where he played sports, made many life-long friends, went to school and graduated Wilmington High School with the Class of 1965.

On February 13, 1967, Nino, was drafted into the United Sates Marine Corps. during the Vietnam War. Nino answered the call and served honorably; he worked his way through the ranks to Corporal and earned several medals and commendations including the National Defense Service Medal, the Vietnam Service Medal with 1 Star, Vietnam Campaign Medal with device, Rifle Marksman Badge, Good Conduct Medal. He was honorably discharged from active duty in December of 1969 and continued to service in the Marine Corps. Reserves until April of 1972.

Nino returned home to Wilmington and his family, he worked hard to get back to a normal life, got involved in his community and gave back every chance he got.

Nino had a great work ethic throughout his life, he went to work for the Comcast Company; he worked his way up through supervisor and managerial positions throughout the years and he always helped his co-workers along the way. Nino saw much technology evolve and was instrumental in running several plants to keep up with the changes through the years; he retired as the Plants Operation Supervisor following many years of dedicated service to the company.

Nino married “his sweetheart” Donna on February 25, 1978; the couple raised four beautiful children and were grandparents to seven grandchildren who he adored. Family was always first to Nino, he was dedicated to his family, he would do anything to help them and always showed them unconditional love. Nino was always there for his kids to coach their sports, attend school functions, special events in their lives, and when not coaching on the sidelines cheering them on. He taught them the importance of hard work, going after their dreams, to help others along the way and always put your family first. Nino’s role as “Grampy” was one he took seriously, he babysat, looked forward to family vacations, sporting events, and he traveled the world to see his daughter, son-in-law and grandchildren that were serving in the Military; he was just so proud of his family.

Nino was a talented cook; he enjoyed being in the kitchen with his wife Donna where they would “whip up” an amazing meal and looked forward to having their table full with family and friends to eat. They had an “open door” policy and all were welcomed at their home; they were always made to feel like family.

In his spare time, Nino, gave back to his community; for many years he coached Wilmington Pop Warner, Wilmington Youth Hockey and Little League Baseball. He loved helping the kids succeed in whatever they were doing and was a mentor to many throughout the years.

Nino loved sports of all kinds, he loved to watch sports, go to sporting events, he owned horses with his pals and he looked forward to the Saratoga trip with his buddies; an annual event where a great time was had by all.

Nino will be fondly remembered as an all-around “great guy”; he was kind and caring towards everyone he met and went out of his way to help anyone. He was a wonderful family man, a great friend and neighbor, and a proud Veteran who looked out for his fellow Veterans. Nino’s passing has left a huge hole in the hearts of those who knew and loved him; he will forever be missed.

Nino was the beloved husband of Donna (Bellis) Trimarchi, devoted father of Tracy Walthour and her husband Scott of Pleasanton, CA, James Angiolillo of Sarasota, FL, Lee Michael Trimarchi and his wife Kelly and Matthew Trimarchi all of Wilmington. He was the Loving “Grampy” of Jacquie, Lauren, Dylan, Anthony, Olivia, Michael and Anthony, dear brother of Maria Collins and her husband Brian of Wilmington and the late Domenica “Mima” Burpee. Nino is further survived by many special nieces, nephews and friends.

Family and friends will gather for a Mass of Christian Burial in St. Thomas of Villanova Church, 126 Middlesex Ave., Wilmington, MA, on Saturday, December 4th at 12:00 noon. Interment with Military Honors will follow in Wildwood Cemetery, Wilmington, MA.

Funeral arrangements are under the direction of the Nichols Funeral Home, Wilmington, MA. 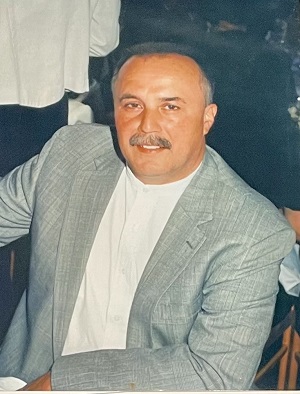