Below is a press release from Austin Prep:

WILMINGTON, MA — On Friday, October 1, 2021, Austin Prep marked the official start of the academic year with the celebration of Convocation Mass. Austin Prep welcomed His Eminence Seán Cardinal O’Malley, Archbishop of Boston, as the principal celebrant and homilist. The celebration, open to parents and livestreamed to the school community, was highlighted by Cardinal Seán’s commissioning of the Daughters of Mary as they begin their time as members of the School community.

Complete with the pageantry expected of Convocation – including the procession of students carrying class banners, welcomed by faculty in academic regalia to the sounds of bagpipers – this year included a parade of flags representing the national heritages of those in our school community. Over 60 national flags were included.

Head of School, Dr. James Hickey P’22, ’23, ’24 ’27, welcomed parents, trustees, friends of the Bannabikira Sisters, Cardinal Seán, clergy, members of the Order of Malta, and Augustinian Friars to the celebration. Dr. Hickey made note of the attendance of Fr. Art Johnson, O.S.A., who was instrumental in opening Austin Prep’s doors in 1963.

“The theme for the 2021-2022 academic year is the commandment of Jesus from the gospel of St. John. ‘Love one another as I have loved you.’” Dr. Hickey said. “As I reflected upon that, it occurred to me that the decision of the Bannabikira Sisters to come to Austin Prep, a new place, a new community, a new country, 7,000 miles from home is an act of unconditional love, similar to the love that mothers have for their children.”

“The arrival of the Bannabikira Sisters is a blessing and opportunity to deepen Austin Prep’s connection to a global world, to broaden our horizons and perspectives about culture, race and the lived experiences of others, and to advance the work we do to spread the Kingdom of God in partnership with the joyful women in the Daughters of Mary.”

Cardinal Seán in his homily continued to reflect on Austin Prep’s 2021-2022 theme from St. John’s Gospel and told a story of St. John: “St. John would celebrate the eucharist for his community and would give practically the same sermon every week. Finally someone got up enough courage to ask, ‘John, why do you continue to give us the same sermon?'”

“I teach love one another, because Jesus, when he was with us on the Earth, he repeated it over and over again. That is what brings meaning to our lives,” St. John responded.

After the homily, Cardinal Seán officially commissioned Sister Paskazia Nakitende and Sister Mary Namutebi as members of the Austin Prep community: “Grant we pray, that these sisters that you have chosen for this special calling, may by their way of life shown to the Church and the world a clear sign of Your Kingdom,” Cardinal Seán said.

To mark the occasion, School-Wide Student Government Officers Patricia Bibeau ’22 and Jack Caruso ’22 presented the Class of 2022 banner, which will eventually be hoisted to the rafters of Meelia Hall, where it will remain until being lowered at Baccalaureate Mass in May, 2022. 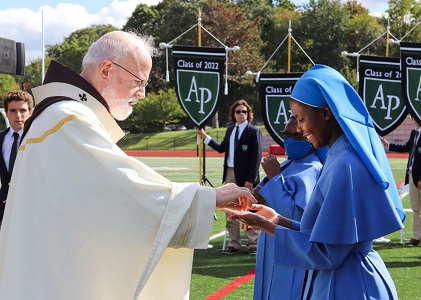