Below is a press release form the Massachusetts Department of Fire Services:

STOW, MA — “Early spring is often when firefighters in New England are busy fighting brush fires. As the season changes, the winds can be strong and unpredictable,” State Fire Marshal Peter J. Ostroskey said. “Please conduct open burning safely and watch the wind. Have a permit and to be ready to shut it down quickly if the weather changes.”

Early spring is usually a busy time for brush fires as people rush to conduct open burning before the season ends on May 1. It is also a windy time of the year as the weather pattern changes. The snow pack has melted, but the ground is only just starting to green up and there is plenty of dry vegetation and leaves from last year to serve as tinder. Low humidity combined with dry, hot and windy conditions make it perfect for brush fires to start and to get out of control, and hard for firefighters to contain. Last April was wet, but May started a 5-month period of unusually dry weather with below average rainfall. As a result, many brush and wildland fires kept firefighters busy across the state. 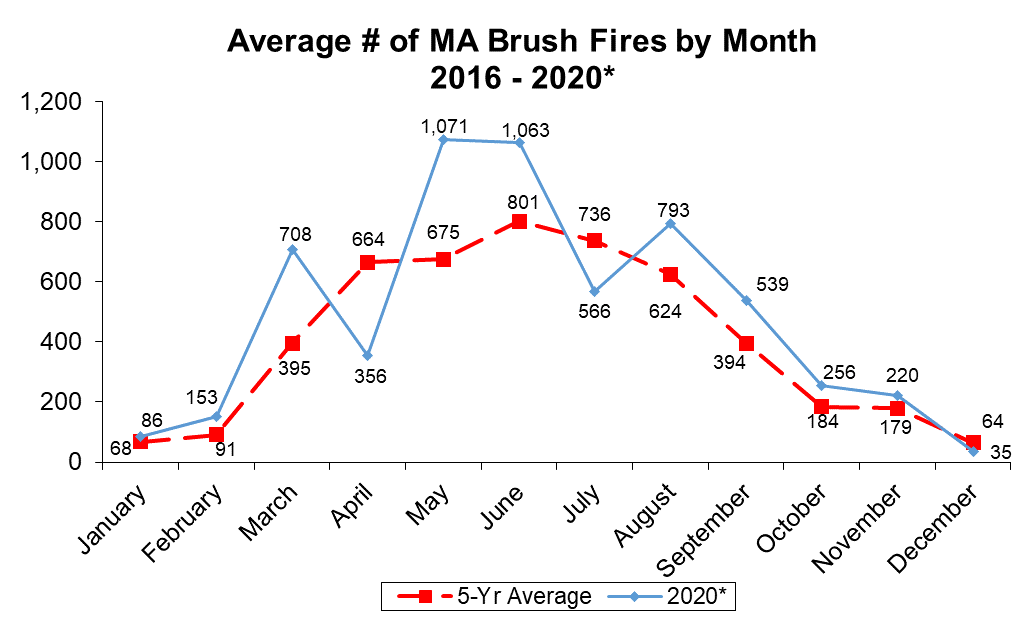 Brush fires are labor intensive and take a long time to bring under control. Multiple brush fires can severely tax a community’s firefighting resources. Prevention is the best approach.

In 2020, Massachusetts fire departments reported 5,846 natural vegetation fires, which caused two civilian injuries, 19 firefighter injuries, and an estimated dollar loss of $217,409; this is a 96% increase from the 2,978 incidents reported in 2019 (which was an unusually low number of brush fires). These types of fires are so weather-dependent and 2020 ranks in the top ten years for brush fires. The Massachusetts Fire Incident Reporting System (MFIRS) collects data on grass fires, brush fires, wildland fires, woods fires and other outside natural vegetation fires, which we refer to generally as “brush fires”.

If the fire should get out of control, call the fire department immediately. “Winds can fan the flames and fire can spread faster than a person can run,” said Ostroskey. “Use the utmost caution to prevent injury and damage to your own and your neighbor’s property,” he added.

Open burning that has gotten out of control is the cause of many brush fires. Open burning season, in communities where allowed, ends on May 1. A permit is required from the local fire warden, usually the local fire chief. Burning can only take place when both air quality and fire conditions are acceptable. “Weather conditions change rapidly, so watch the wind and be prepared to extinguish your brush pile. A sudden wind change is how most open burning fires get out of control,” said Ostroskey. In 2020, fire departments responded to a huge increase (49%) in unauthorized burning and had to have owners shut them down, or extinguish those that got away from owners.

Department of Conservation and Recreation (DCR) district fire wardens determine the fire danger rating daily, which assists local fire departments determine whether it is safe to issue burn permits. Weather and air quality can change rapidly, especially in the spring, and fire departments can rescind permits when that happens. Follow local procedures for using the permit on any given day.

How to Safely Burn Brush