Below is a press release from ERA Key Realty Services:

WILMINGTON, MA — The Wilmington office of Northbridge-based ERA Key Realty Services is encouraging area residents to support local charities and help each other through its “30 Days of Giving Challenge.”

A billboard near the train station at Routes 38 and 129 encourages those driving or walking by to participate by visiting erawilmington.com. Visitors to the site will find a downloadable calendar with charitable tasks for the day, as well as information about local charities.

A different charity will be promoted on the site each week throughout November. The four charities being featured include the Northeast Animal Shelter in Salem, which finds homes for dogs and cats, and is one of New England’s largest non-profit, no-kill animal shelters; the Wilmington Community Fund, which runs a food pantry and assists residents in need; the Wilmington Veterans’ Department, which assists needy veterans, and We’re One Wilmington (WOW), which also assists people in need  and was created “to strengthen our community one good deed at a time.”

The downloadable calendar includes daily ideas for giving, such as, “Buy someone a coffee to pay it forward when you get yours.” The website includes links to Facebook and Instagram pages, where participants can post pictures when they participate.

The calendar is set up like a Bingo card. Participants’ names will be entered into a raffle and winners will receive prizes at the end of the month. Winners will be announced on December 1, 2020, which is Giving Tuesday.

Team Blue is also partnering with DaMore Law of Burlington to sponsor a Thanksgiving pie fundraiser. For every pie purchased at Josie’s Bakery in Wilmington through Nov. 18, 2020, Team Blue and DaMore Law will donate $10 to WOW. Participants should call or text 978-810-0523 and mention #30daysofgiving2020.

Lori Penney, leader of ERA Key’s Team Blue, came up with the “30 Days of Giving Challenge” as a way to promote giving and area charities.

Agents in the Wilmington office will also be promoting the event through their social media contacts.

ERA Key Realty Services of Northbridge, Mass., has 14 offices throughout central and eastern Massachusetts and is among the 10 largest residential real estate agencies in Massachusetts based on the number of homes sold. It is also among the top 10 agencies in the ERA Franchise System, which has more than 2,400 agencies worldwide. ERA Key has been named among the top places to work in the state in the large company category for the past five years, based on a survey administered by Energage for The Boston Globe. It also won the Momentum Award as the fastest growing ERA franchise in 2012 and the Gene Francis Memorial Award as the Top All-Around Company in ERA in 2014 and 2018. For more information about ERA Key, visit www.erakey.com. 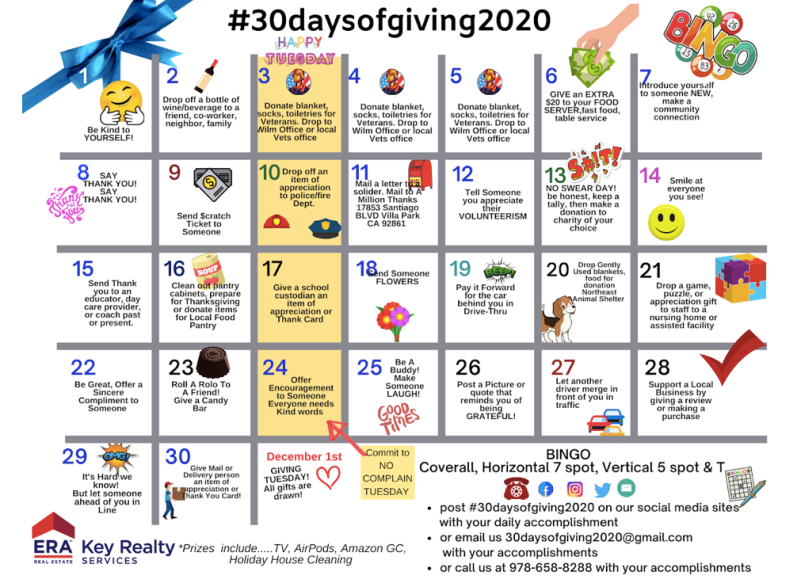