WILMINGTON, MA — At the most recent Wilmington Board of Selectmen Meeting, a resident asked the Selectmen to add an extra level of transparency around its meeting agenda process.

An example of the Selectmen’s meeting agenda is below: 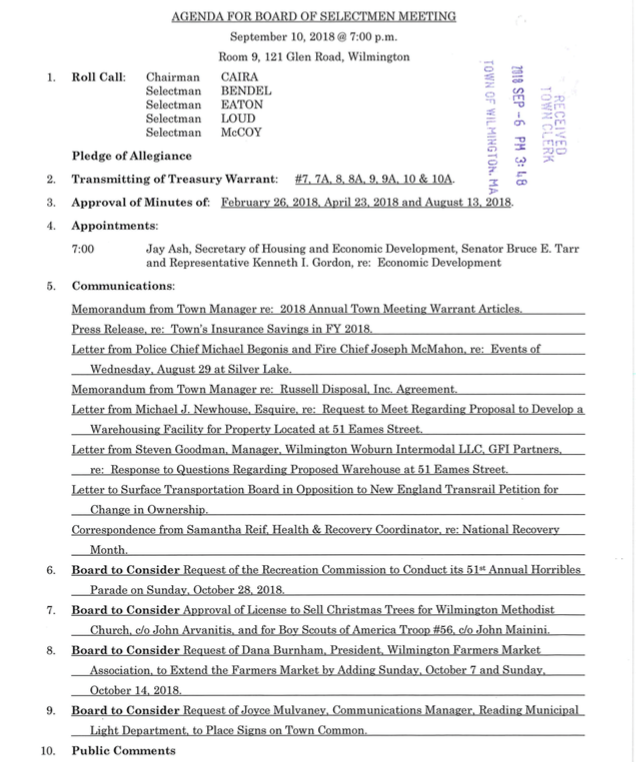 “I was interested in the New England Transrail stuff because I live right around the corner, and I didn’t know what [the communications] entailed, just that it was about that property,” continued Domek. “I was looking for the who, what, where, why and when of what was going to be discussed here. It’s just a little frustrating to come in and not have that knowledge until I’m sitting here and I don’t have time to think about it and research it…. When the agenda is posted, could these attachments — such as letters, memos, etc. referenced on the agenda — also be posted along with it?”

“It’s certainly possible,” responded Town Manager Jeff Hull. “It’s the board’s call if they’d like to have attachments of the correspondence posted in the future.”

“I would prefer that,” chimed in Selectman Jonathan Eaton. “In the interest of public transparency, you bring up a really good point.”

“I think a lot of people may not come to these meetings because they don’t think [agenda items] pertain to them,” added Domek. “They may, however, come to the meeting once they read the attachments, receive more details, and get a better understanding of whatever the attachment is. They may want to come in and have their say.”

“I believe you’re all wiling to be transparent and this would be a great service for the community,” concluded Domek.

Of note, the Wilmington School Committee has been posting its entire meeting packet, which includes correspondence, memos, reports, letters, etc. — along the lines of what Domek is requesting of the Wilmington Board of Selectmen — since the 2013-2014 school year. School Committee meeting packets can be found HERE. The packets are typically posted approximately one week in advance of each meeting.