WILMINGTON, MA — Shortly after 11pm on Monday, while patrolling Interstate 93 northbound in Wilmington, State Police Trooper Stephen Thomson observed a black Acura TLX sedan with flashing blue lights and a New York plate being driven at an extremely high rate of speed. The Acura was changing between the middle and left lane at speeds estimated to be greater than 110 mph, and other vehicles, believing it to be a police vehicle, were moving out of the way. Trooper Thompson queried the vehicle, and upon determining it was in fact not a police vehicle, activated his marked cruiser’s blue lights and siren and attempted to conduct a motor vehicle stop as the Acura got onto Interstate 495 southbound.

The Acura kept traveling in the middle lane and refused to stop. Troop A headquarters authorized a pursuit and assumed command and control. Troopers pursued the Acura approximately 10 miles until it stopped at Exit 34 in Chelmsford.

Trooper Thomson, assisted by Troopers Kenneth Quigley, Francis Ducharme, and Emily Todisco, removed the three male occupants from the Acura and secured them in handcuffs. The occupants were identified as KEVIN PORTALATIN, 27, of the Bronx, N.Y., who was the driver; SAMUEL E. MORALES, 38, also of the Bronx; and YEFRI ARIAS-RODRIGUEZ, 22, also of the Bronx.

The driver PORTALATIN told Trooper Thomson that he was a volunteer police officer and firefighter and he thought the pursuing Troopers were “helping” him. The driver also stated the group was coming from Lawrence, despite the fact that they were observed traveling in a northerly direction in Wilmington, which is south of Lawrence. The driver then stated that the men were rappers from New York and were going to do a show.

Troopers observed that the Acura had flashing blue lights in the front and back. During an inventory of the Acura prior to its being towed, Troopers discovered a box containing $100 bills believed to be counterfeit. The bills were stacked in 10 separate bundles each bound with a paper band. A single $20 bill, also believed to be phony and with Chinese writing on it, was also found. Troopers also located, in the car, three bottles of pepper spray and a handheld radio that scans police dispatches.

Troopers transported the three men to the State Police-Andover Barracks, where they were booked. A special agent from the United States Secret Service responded to the barracks, interviewed the men, and confirmed that the bills were counterfeit.

PORTALATIN is charged with the following offenses:

MORALES and ARIAS each face charges of possession of counterfeit notes. 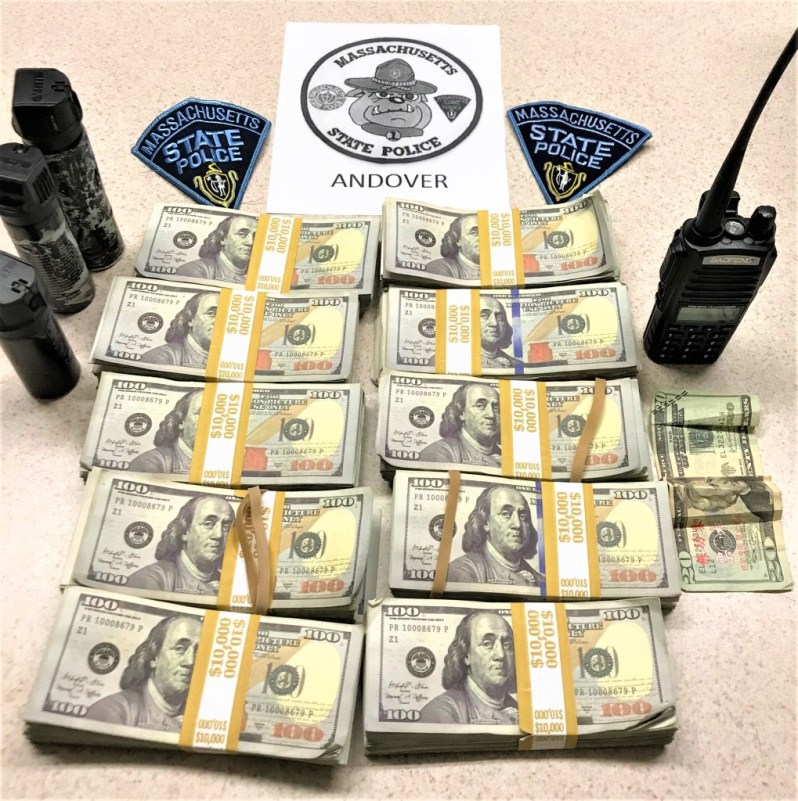 (NOTE: The above press release is from the Massachusetts State Police.)